On March 30, the City of Cincinnati signed a purchase agreement was signed to buy right of way access to part of the Oasis rail line.  This stretch of rail will become a 4.4-mile bike and pedestrian trial. It will run from downtown Ted Barry Park to Lunken Airport bike trail. From there Great Parks of Hamilton County is building a connector across the Little Miami to the Little Miami Bike trail.

This Trail promises beautiful views of the Ohio River and it is an important connection to the Little Miami Bike Trail along the National Wild and Scenic Little Miami River via the Beechmont Connector.  It is also an important link in the Crown, a 34-mile bike trail circling much of Cincinnati.

Years ago, Sierra Club was very involved in the possibility of this trail during the efforts to stop a new highway and bridge over the Little Miami River. Despite lots of meetings and lobbying, the effort was stymied by the Railroad that did not like the idea of a trail near their rail line.  While SORTA owned the rail line, Genesee & Wyoming had rights to use one set of tracks.

Back in 2012 and 2013, Sierra Club, along with Ohio River Way held a large bike ride along Riverside to the Lunken Bike Trail and Armleder Park and back to show how awesome it would be to have a bike trail from downtown to the Little Miami River. 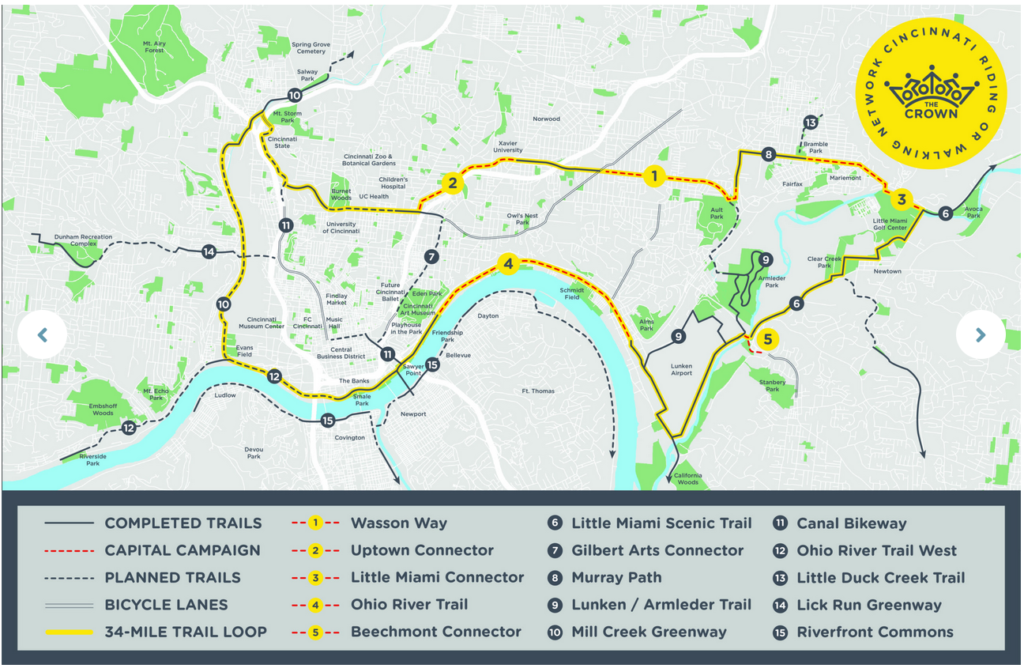 Oasis is segment 4 in the above map of the Crown.

Wasson Way is another part of the Crown, currently being built. Phases 4 and 5 are expected to be completed this year and Phase 6, between Xavier University and Avondale, by 2023. Click here to see a PDF of the Wasson Way “spine”.

Great Parks of Hamilton County has held a public hearing on a new trail from Glenwood Garden to Winton Woods (click here for a PDF map of the trail). This trail will be about 3.6 miles and connect to the already built portion of the West Fork of Mill Creek Trail. The above link has information about how to comment on the trail. This comment period is open until May 1, 2021.

This regional trails map (PDF) shows how the Glenwood Gardens to Winton Trail connects to the already built sections of the West Fork of Mill Creek Trail. This map also shows the potential route of a bike trail from Glenwood Gardens to Sharon Woods.

Here’s a map of Cincinnati’s current and proposed trails (PDF), and there are a number of other trails in the concept stage around Hamilton County. Some of these are being considered now as part of the Eastern Corridor Project.

What to see more shared use trails?

The Miami Group Transportation Committee meets the first Tuesday of each month on Zoom at 5:30 p.m. Join our Google Group by sending an email to “[email protected]”.

If you would like to receive the Sierra Club Miami Group monthly newsletter and action alerts, please fill out the form below. We’ll put you on our mailing list, and we will never sell your contact information to anyone else!

Yes! I'd love to join a committee!
x

This Site Is Protected By
ShieldPRO →